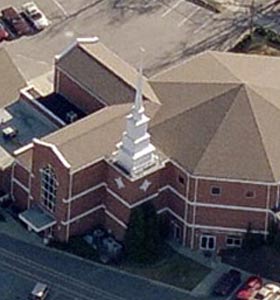 However, Baptist churches do not have a central governing authority. Each church is locally governed. Consequently, a wide range of beliefs and worship practices can be seen among Baptist churches. The following acronym as a summary of the common elements of Baptists churches: Biblical authority; Autonomy of the local church; Priesthood of the believer; Two ordinances (Believer's Baptism and Communion) ; Individual soul liberty; Separation of Church and State and Two offices of the church (Pastor and Deacon).

A Brief Account of the Early Saint John Baptist Church

Saint John Baptist Church had its beginning in the early 1900's as a small body of Christian believers gathered for a time under the spreading branches of a tree to raise their voices to God in prayer and to sing songs of praise to His Holy Name. "Smith Quarters" was the name of this small neighborhood located nearly six blocks from the present site of the church today. This group later held services in the "Old Empty Schoolhouse." As time passed, they met in the Lodge Hall on McKinley Street.

Realizing the need for a building, the people began saving their money to purchase land. In 1907, the purchase was made and the men of the neighborhood built the church during their spare time, using old pieces of lumber and bricks from torn down houses. The building was completed and its first cornerstone, dated 1908, was put in place. The erection site was at the corner of Asylum Road, (now Farrow Road), and Feaster Avenue, (now Beltline Boulevard), our present location.

This history continues with the services of our illustrious pastor The Reverend Dr. Jamey O. Graham, Sr. (10 years of notable service)